skip to main | skip to sidebar

Our most recent issue of SHDTC Updates focuses on local, state, and federal efforts to address climate change.

Despite concessions to get the the country's first significant climate legislation over the finish line, Senate passage of the Biden administration's "Inflation Reduction Act of 2022" will see the U.S. taking a leadership role in addressing climate change over the coming decade. Democrats said the effort "would represent the single biggest climate investment in U.S. history, by far" and put the country on track to reduce greenhouse emissions by 2030 from 2005 levels.

If you have a idea for an upcoming SHDTC Updates,newsletter, please email us at: southhadleydemocrats@gmail.com. 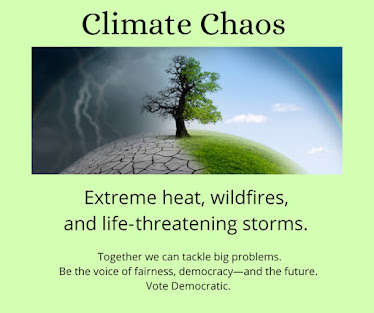 Our business meetings are usually held on the second Thursday of the month. While meetings are scheduled to take place in the Community Room at South Hadley Public Library, we will decide each month whether to meet in person or via Zoom based on conditions nearer to the meeting date. Due to the change this year in our regular meeting dates, our monthly Friday 'breakfast' meetings are now usually held on FOURTH Fridays to allow more time between the two events; when possible, we will seek to do these outside during warmer months.

For event information or to RSVP and receive a meeting link or other details, please email: southhadleydemocrats@gmail.com.

Our most recent SHDTC Update is provided by SHDTC friend Denise Presley. Denise's article encourages us to take seriously the potential consequences of a US Senate returned to GOP control in November's midterms. Many thanks to Denise for her work to bring this article to SHDTC members and friends.

The SHDTC communications subcommittee is trying to ramp up our outreach to voters as we look ahead to the fall elections. If you have an article or idea for an upcoming SHDTC Update or other communication, please email us at: southhadleydemocrats@gmail.com.

After a fascinating 'Episode 8-Season Finale' at 8pm on Thursday, July 21, 2022, the Select Committee indicated that members would spend the month of August reviewing information that has come to light and now anticipate that additional hearings will be held in September. Check the Select Committee Meeting Calendar for any new additions and schedule changes.

The July 21 prime time session broke down the 187 minutes in which Trump sat watching rioters on TV from the White House without acting, and including audio of alarmed Secret Service agents' calls to families in case they didn't make it. This followed a riveting seventh hearing on Tuesday, July 12 at 1:00pm (moved from 10am) focused on Trump's role in the formation of the mob.

The previous week, a surprise sixth public hearing was held on Tuesday, June 28 at 1:00pm to "present recently obtained evidence" and receive witness testimony (from White House aide Cassidy Hutchinson). The Committee had earlier anticipated the next round of hearings would begin July 11 after a House recess.

After the House Select Committee's opening prime time hearing on June 9 at 8pm, which reviewed the January 6 attack and Trump's role in inspiring it, a second hearing followed on June 13 at 10am focused on the 'Big Lie' that the election had been stolen and related fundraising. The hearing on June 16 at 1:00pm targeted Trump's efforts to have Mike Pence stop the January 6 Electoral College certification, while one on Tuesday, June 21 at 1pm, targeted efforts to influence state legislators and election officials. A hearing originally scheduled for Wednesday, June 15 at 10am was moved to Thursday, June 23 at 3pm (after a time change from 1pm), and focused on efforts to influence and possibly replace the US Attorney General.

The original draft schedule (The Guardian, May 23, 2022) had six televised hearings that would begin and end with prime time broadcasts; at least seven are now anticipated. Daytime hearings typically run from 2 to 2.5 hours, and prime time from 1.5 to 2 hours.

As a result of redistricting enacted in November 2021, new Congressional, Senate, Council, and House districts in Massachusetts will become effective for the 2022 election cycle. South Hadley will move from the Hampshire, Franklin, and Worcester District represented by state Sen. Jo Comerford to become part of the First Hampden and Hampshire District currently represented by state Sen. Eric Lesser, who is running for Lt. Governor. Other communities in the district include Granby, Belchertown, Palmer, Warren, Ludlow, Wilbraham, Hampden, East Longmeadow, and Longmeadow as well as portions of Springfield and Chicopee.

Current state Rep. Dan Carey's district was unchanged in the redistricting process and he is running unopposed in 2022.

Democratic candidates who have announced they are running for the First Hampden and Hampshire senate seat include:

In addition to the state senate seat, three Democratic candidates are running for Hampshire County Sheriff.

As of mid-July, four Democratic candidates are now running for Governor's Council:

The following Democrats are running for statewide office in the September 6, 2022 State Primary Election. Election day voting hours are 7am to 8pm, and all South Hadley precincts vote at South Hadley High School, 153 Newton Street. Early voting is August 27 to September 7. The registration deadline for the primary is August 27, 2022 (download a mail-in voter registration form).

Regional and County candidates are also on the primary ballot; for South Hadley voters, there are contested races for State Senator, Hampshire County Sheriff, and Governor's Council.

In the State Election on Tuesday, November 8, 2022, voters will choose those to represent them from among primary winners and weigh in on ballot questions.

Thanks to candidates for joining SHDTC!

We thank all the candidates who took the time to speak and take questions at our April, May, and June meetings.

Other links of interest